Automakers are turning to buyers like 64-year-old Martin Friedman for the same reason Willie Sutton robbed banks: That’s where the money is.

Friedman, retired three years ago as a Wayne County (Mich.) court reporter, recently leased a 2012 Cadillac SRX (that’s one above). He’s happy because has a new Caddy. And Cadillac of Novi (Mich.), is happy because, God-willing, Friedman will be back in 24 months at lease-end to get another new car.

Baby Boomers’ retirement savings may have been creamed by the financial crisis and their inheritances shrinking as parents live longer and need of expensive care. But Boomers are buying new cars like never before.

For the Detroit automakers, Boomers now account for 67% of sales.

“The amazing thing is the retirees. They’re coming in waves,” said Dan Frost, owner of Cadillac of Novi and also Chrysler-Jeep-Dodge-Ram dealerships in Michigan. “They used to be cash buyers. Now we’re getting them into leases so they come back in a few years.”

The post-WW II Baby Boom is defined by demographers as Americans born from 1946 through 1964. Millennials were born after the late 1970s.

The research calls into question automakers’ current rush to court younger buyers through social media or targeted reality shows, such as Ford’s “Escape Routes.” True, some Boomers spend significant time on social media and watching shows aimed at their children and grandchildren. But until the incomes of more Millennials stabilize and grow, the question will persist.

“You can’t build any loyalty among people who are not paying attention,” said AARP’s Bradbury.

Americans older than 50 do make up a larger percentage of the population now, about 42%, up from 37% in 2000, Census data show. But their share of new vehicle purchasing grew at a much faster clip in the same period.

That’s because the recession hit that group even harder, says Charles Ballard, Michigan State University economist. “A substantial portion of it has to be a result of income shifts. … The Great Recession has visited a lot of pain upon those who are early in their careers.” 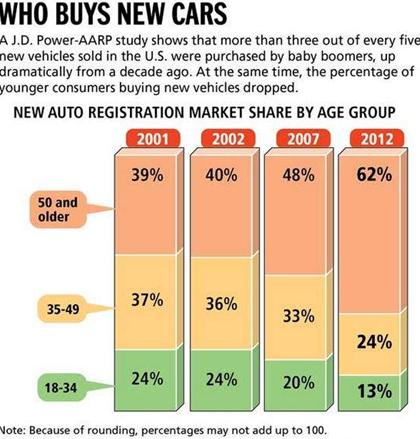